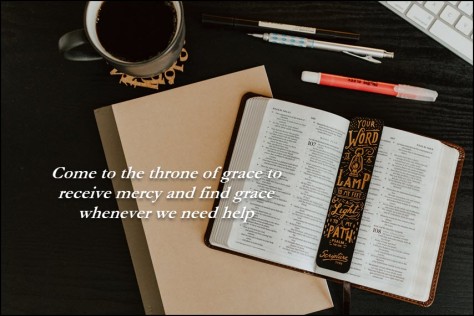 Joshua 19-21  The Israelites still had not conquered all the land, so Joshua sent teams out to scout out the land, and to bring him their findings at the camp at Shiloh. The men journeyed through the land and mapped it and its cities out into seven regions on a scroll. Without maps, we would be spatially blind because they are an abstract image of locations. Thus the chapters in Joshua give us spatial relevance as to where the tribes were to claim land ownership as part of their inheritance.

Joshua parcels out their inheritance based on those maps. In this chapter, we find that Simeon was given land within the boundaries of Judah, thus fulfilling Jacob’s prediction that Simeon would experience dispersion because of his sin with Levi in the city of Shechem after their sister’s rape.  Which brings us to the lesson we need to learn: your sin will find you out. God remembers and looks for us to admit our sin, but if we do not, He allows for sin to come to fruition before punishing. Jacob reminded both that their knives were weapons of violence, and thus both sons would be scattered. The Levites were foolish slaughtering foreigners but were zealous in defending God’s honor at the Golden Calf incident. Simeon is the only tribe not blessed by Moses and is later is placed in “protective custody” in the land of his brother Judah. Levi was later exalted not because of who he was or what he had done but only by God’s grace. Simeon’s curse remained because he did not seek God’s mercy.

God hates sin and its fruit. Let us learn from Simeon!

Grace and Mercy are free at the throne of God. Seek it! 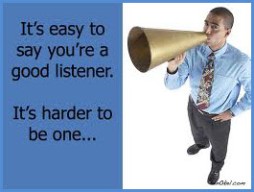 How good a listener are you? An old Turkish proverb says “if speaking is silver, then listening is gold.” Tests confirm that the majority of us today are poor listeners. Could that be a reason why God has repeatedly told us and as we read in Revelation “the one who has an ear had better hear what the Spirit says?”  Three sets of individuals in Luke 2 were exceptional listeners and were blessed by God for their attentiveness.

Picture the Shepherds; the despised and rejected in Israeli society, yet necessary to the worship program of the temple. It was to these that God chose to send his angelic choir to announce the Lamb of God in a manger. The angelic figure began: “Listen carefully.” How good a listener were they?  In vs 15 they decided to go and see “what the Lord has made known to us.” And their memories were crystallized as they recounted to Mary and Joseph and the dwellers in Bethlehem all that had been told to them.

Picture Simeon, filled with the Holy Spirit who had been looking for the restoration of Israel. He had been listening so that he was ready to hear the indwelling Holy Spirit speak. He followed the directions and came to the Temple just at the time Mary and Joseph were there. Simeon said to Mary and Joseph “Listen carefully” as he recounted the future of this child, Jesus who would be the Light of the World but would be rejected.

Picture Anna the widow who listened to God as she fasted and prayed in the temple for 84 yrs! She too came at just that moment to give thanks to God and may have said to those nearby “Listen carefully” as she spoke about the child.

How good a listener are you? Is your world quiet so you can hear the voice of the Holy Spirit or filled with noise that blocks His voice? The shepherds’ world was a field quiet at night with only God’s creation yet their  hearts were prepared to listen. Simeon’s world was a prayer closet where he could hear God speak. Anna’s world was in the Temple, both quiet and noisy depending on the season. Her heart was quiet so she could hear God speak. They all heard the voice of the Spirit, obeyed and were blessed.

May our prayer today be as Samuel’s of long ago “Speak Lord for your servant is listening.” 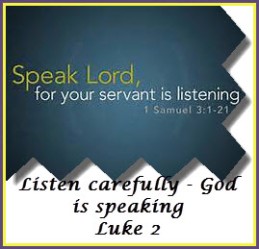 Worshiping the Lord through Study of His Word

READING FOR THE GLORY

Daily devotions to accompany a one year Bible reading plan.

Join me as we glean truths from God's Word

A voice in the wilderness

Thoughts and what I happen to be studying in scripture

Musings, rhetoric and other interesting stuph...